Smart cities and green technology have risen to the top of the global agenda as a means of preparing for a better future. Previous traditional autonomous street light designs may have overlooked the importance of environmental issues such as carbon dioxide (CO2) emissions in implementation, exposing the world to new humanity challenges such as climate change. Recognizing the importance of preserving the world that we call home, the smart city concept is introduced to monitor, control, and manage resources such as energy and water usage in buildings. It is rare to find a successful implementation of a wireless street light monitoring system in the Malaysian environment. Although the benefits of energy efficiency are undeniable, implementation may be limited due to issues such as high costs and non-dimmable installed solar street lights. Malaysia’s existing street lighting system has been discovered to consume a lot of energy and require a lot of maintenance. The available street lighting systems are controlled by a timer switch or a light sensor, which automatically turns on the street lights at sunset or at low light intensity and turns them off at sunrise.

One of the technologies that support green environmental work is smart street lighting. The advancement in wireless communication and low energy street lighting technology has laid the groundwork for the development of smart cities. This paper presents preliminary work toward the development of an entire smart street lighting system with a focus on the Malaysian environment. The system incorporates the Wireless Sensor Network (WSN) concept into its design, with Waspmote serving as a sensor node, Meshlium serving as a gateway, and a computer serving as a server. The sensor node can be used to monitor the street light’s running status, energy consumption, and dimming time for data collection. 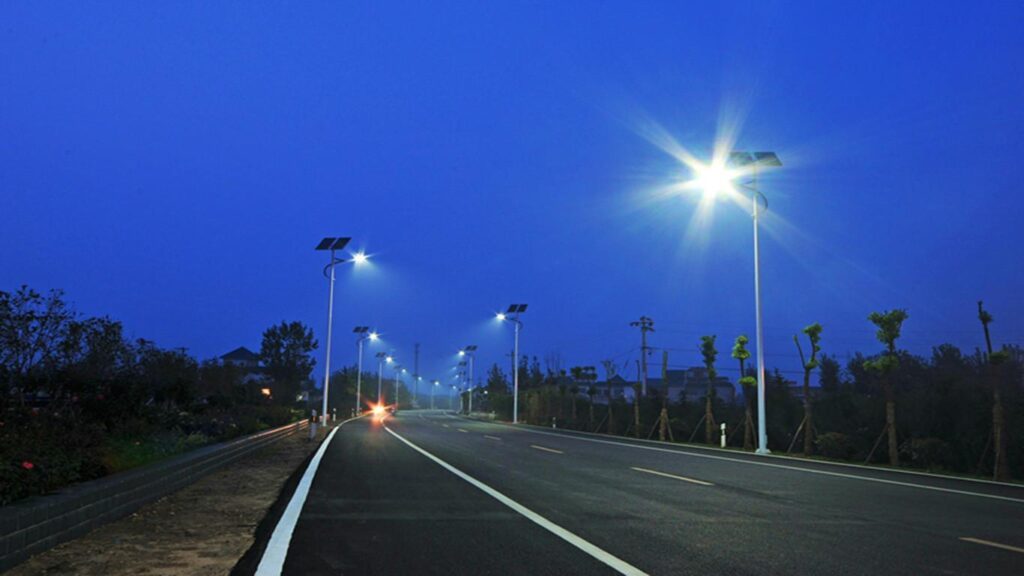 The goal of the project is to provide an alternative to traditional lighting for a community in Malaysia’s Sabah state. Here, 100 sets of Cmoonlight Palm series integrated solar street lights have been installed successfully. When customers searched for products on the Internet, they came across our Palm series for the first time and were blown away by its exquisite appearance. At the same time, customers have higher expectations for solar panel power and brightness forsolar power lights, which the Palm series can fully meet.

Cmoonlight solar street lights is a patented product. This series of products employs an innovative streamlined unibody structure, flexible angle adjustment, high wind resistance, ultra-bright Philips lamp beads, and a large-capacity lithium iron phosphate battery, with a maximum power of 120W. A unique lens with a beam angle of 140*70 degrees can provide a much larger effective lighting area than conventional solar lights for mounting at the same height.

“Sustainable development and green technologies must play a key role in driving the country’s economy,” Malaysian Prime Minister Mahathir Mohamad recently stated. In this context, the Malaysian municipality of Shah Alam, Selangor, aspires to become an eco-responsible “smart city” by implementing technologies that are both efficient and environmentally conscious.

The municipality wanted to set an example by modernising the lighting in the entrance to Shah Alam City Hall before deploying the innovative solar street lights manufactured in France by Sunna Design. The existing lighting system was inefficient, with inefficient ball lamp posts emitting significant light pollution by illuminating the sand. Simply unscrew the lamp back cover and remove the battery box; there is no need to remove the entire lamp from the pole for battery replacement; this is a very simple and convenient method.

Aeroline Services was able to replace these old urban lights with ISSL+ off-grid solar streetlamps thanks to the technical assistance of Sunna Design teams. The proposed solution was perfectly suited to the lighting of traffic and pedestrian areas near the city hall’s entrance. The end result is impressive, thanks in part to the proposed photometric optics, which allow the lighting distribution to be concentrated on traffic areas while avoiding any light pollution towards the sky. This installation has improved the comfort of users and citizens by increasing the lighting level and uniformity.

The City Hall teams were particularly impressed by the speed with which the project was implemented. In fact, a two-person team was able to install each ISSL+ solar streetlight on existing poles in less than 5 minutes. Sunna Design and Aeroline Services once again managed flawless logistics to successfully deliver this project, whose symbolic significance is as important as the technical performance, from order confirmation at the end of August 2020 to product manufacturing and lighting commissioning in October. Aside from the ease of installation, the decision-makers were swayed by the products’ dependability, intelligent lighting management, and use of solar energy. Furthermore, this project is perfectly aligned with the City of Shah Alam’s ecological transition process.

Cmoonlight
In the race of solar streetlights, Cmoonlight has simply won. It has made a name for itself with futuristic designs, high-quality materials, and excellent service. It has completed projects in Spain, Thailand, Saudi Arabia, and China. It is now aiming for a broader audience. Malaysia is famous for its beaches and rain forests. It is a popular tourist attraction because it is home to the famous twin Patronas towers. It is also one of Cmoonlight’s main markets, and there is a chance that Cmoonlight will have a project in Malaysia in the future. Malaysia’s government aims to make the country a developed one by 2025. It is an upper-middle-income country with a strong interest in modern technologies. After a successful venture in another Southeast Asian country, Thailand, Cmoonlight is looking forward to launching another project in Malaysia, which is a promising prospect for a developed state in the future.

Solar Streetlight with All-In-One Function
Considering Malaysia’s climatic conditions, the vast variety of parks, and the fact that it has one of the world’s longest road systems, the All-in-one solar street light project in Malaysia is very beautiful.

Why choose an all-in-one solar street light?
This solar streetlight, as the name implies, has many more features than a standard solar streetlight. It has a lot more to offer than just the original features. These streetlights, which include sensors and CCTV cameras, completely alter the game.

Battery
These streetlights are powered by a LiFePO4 battery. The lithium batteries used in these solar street lights have a lifespan of 8-10 years. Lithium is well-known for its ability to store energy and last for an extended period of time. As a result, Cmoonlight used only the highest quality lithium in its lights to ensure proper operation of the streetlights.

CCTV camera:
These all-in-one integrated street lights also include a CCTV system. These CCTV cameras are of the highest quality. This improves the security of the area and makes it safe for people to use. This is perfect for Malaysia, which is a popular tourist destination.

Motion sensor:
These all-in-one solar street lights come with high-quality motion sensors. PIR sensors are used as sensors in these lights (passive infrared sensors). These sensors are capable of detecting the movement of any object. When an object comes close to a light, these sensors help detect it. When these streetlights detect vehicles or people, they adjust their brightness accordingly.

Working hours:
These street lights can be charged in 6-8 hours and run for up to 12 hours at night, making them an excellent investment. These lights are made with LED lights that have a lifespan of more than 80,000 hours. The battery in these streetlights has a lifespan of 2000 cycles.

Energy-saving streetlights:
These streetlights are also great for saving energy. Not only do these have a high conversion rate, but they also have a control system that can lower or increase brightness based on the presence of an object. When an object, usually a car or a person, moves near the light, the sensors detect it and increase the brightness of the light. The brightness is reduced after the object has passed. These lights have a detection range of up to 20 metres. This saves energy and allows the light to operate for a longer period of time. In fact, if fully charged, these lights can last for 4-5 rainy days. Malaysia is a country that has gone through a lot.

Qualifications and warranty:
These lights have CE, RoHS, FCC, IP65, and SGS certifications, as well as a 3-year warranty. That is why it is regarded as a wise investment. Because of the enormous growth in popularity of solar street lights worldwide, Cmoonlight has been working on constantly improving its quality and providing additional benefits to the public. These provide both the government and the general public with the tools they require to feel safe leaving their homes or travelling at night without having to contend with dark, poorly lit neighbourhoods or roadways. Cmoonlight hopes to launch a project in Malaysia in the near future. 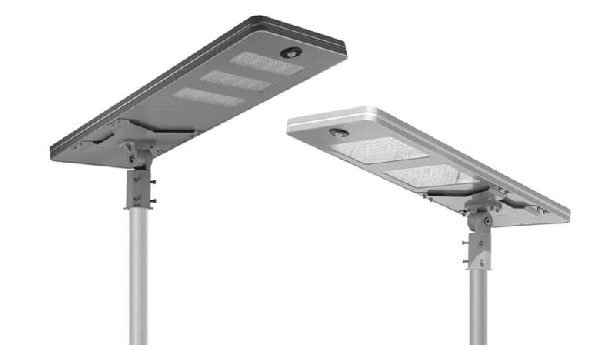 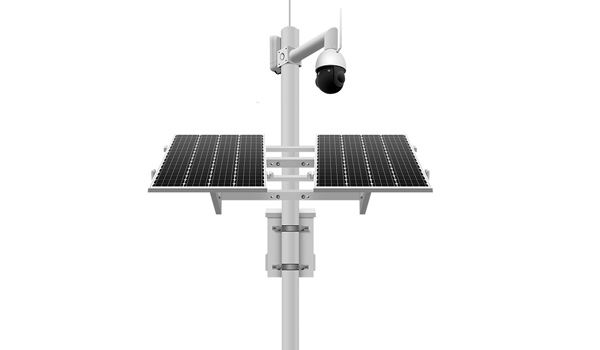 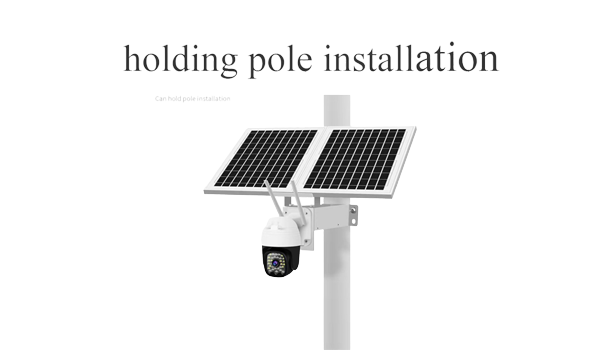 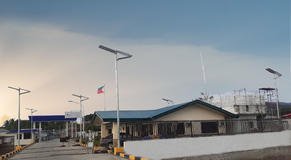 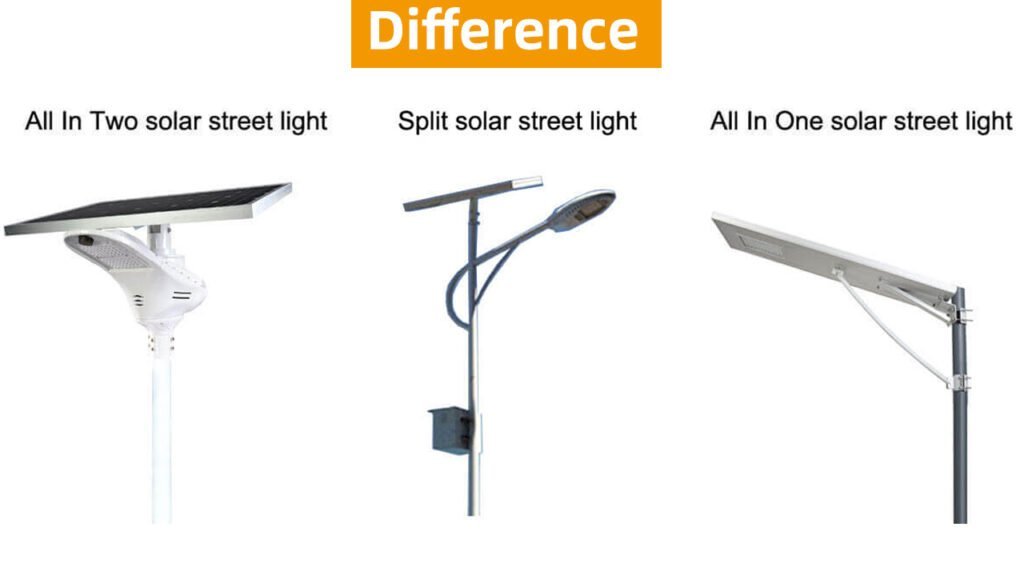 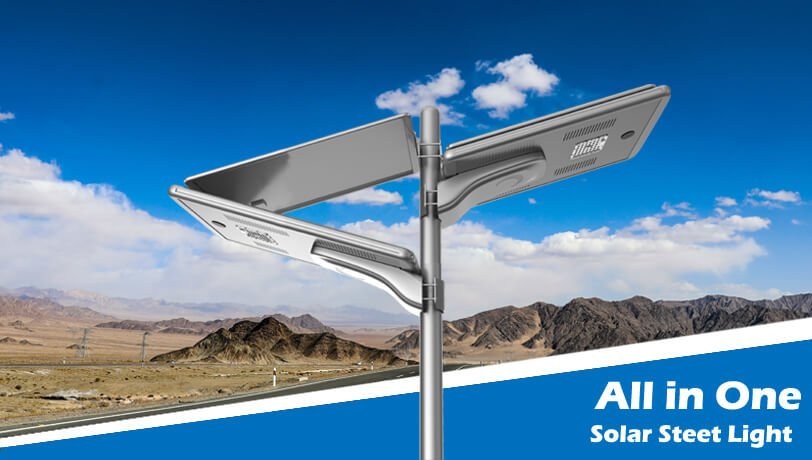 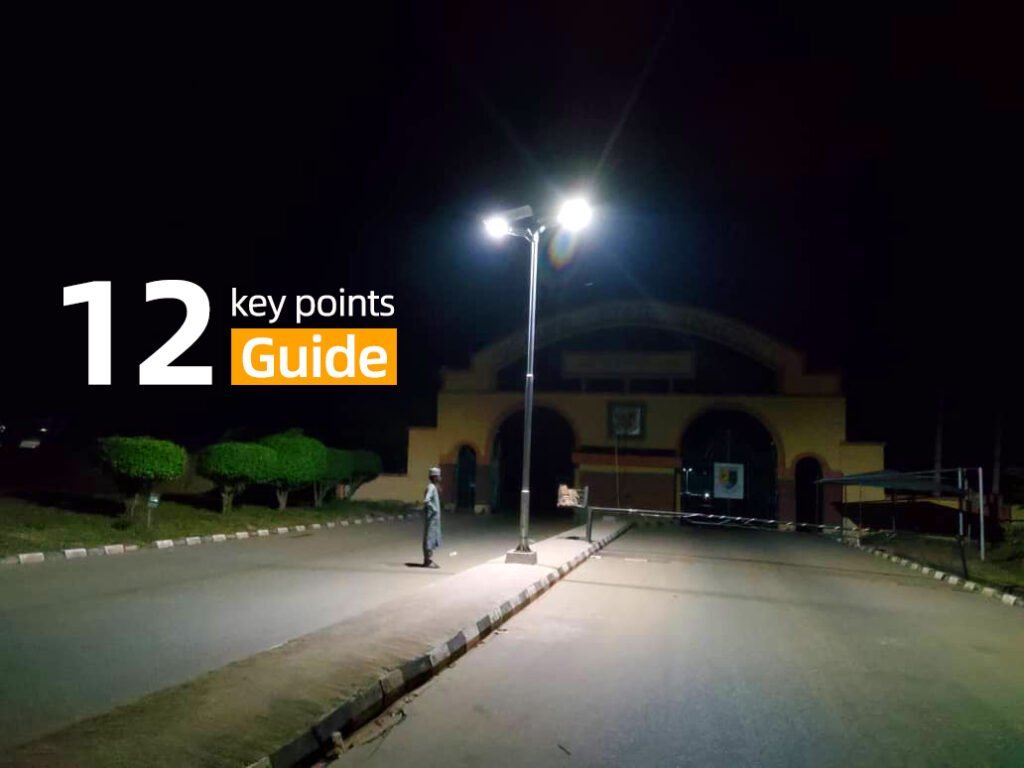 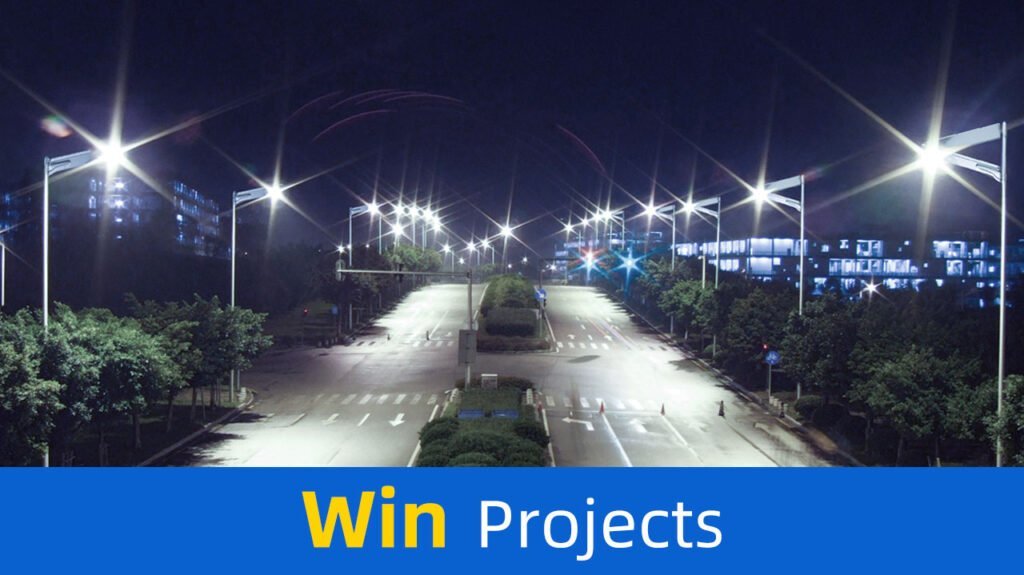 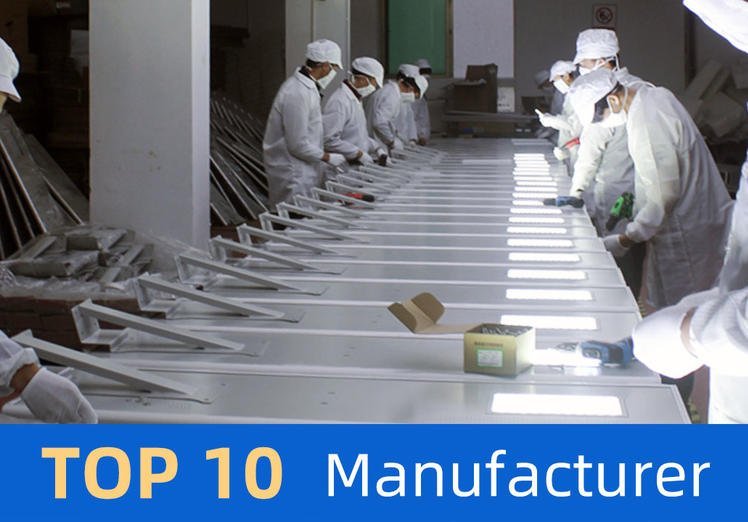